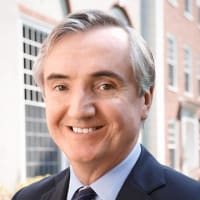 Joseph Fuller is a Professor of Management Practice in General Management and co-leads the school’s initiative, Managing the Future of Work. He currently teaches the Becoming a General Manager course in the second year of the MBA program and formerly headed The Entrepreneurial Manager course in the program’s first year. A 1981 graduate of the school, Joe was a founder and first employee of the global consulting firm, Monitor Group, now Monitor-Deloitte. He served as the Chief Executive Officer of its commercial consulting operations until 2006 and remained a Senior Advisor to the firm until its acquisition by Deloitte in 2012. During his three decades in consulting, Fuller worked with senior executives and policymakers on a wide variety of issues related to corporate strategy and national competitiveness. He has particularly deep experience in industries with a heavy reliance on technology, such as life sciences, ICT and the defense and aerospace industries. He is currently researching the evolution of the role of the CEOs and the C-suite in public companies.

Joe is the co-head of the school’s multi-year initiative on the future of work. He began working on that issue as a contributor to the school’s project on U.S. competitiveness. His research has probed the “skills gap” and investigates the paradox that many employers have chronic difficulty filling jobs while millions of Americans remain unemployed, underemployed, or have left the workforce. He was the principal author of Dismissed by Degrees: How degree inflation is undermining U.S. competitiveness and hurting America’s middle class, a study that investigated degree inflation, the phenomenon of employers raising the academic credentials required of job applicants for positions that have not historically required a degree. The paper is the first to quantify the extent of degree inflation and the high costs incurred by employers who adopt such policies. He was also the principal author of Bridge the Gap: Rebuilding America’s Middle Skills, a widely cited white paper on that investigates the labor market for jobs requiring more than a high school degree and less than a four-year college education. He also co-authored Managing the Talent Pipeline: A New Approach to Closing the Skills Gap in conjunction with the U.S. Chamber of Commerce Foundation. His current research focuses on the future of work more broadly, including mechanisms employers can use to address the skills gap and the implications of changing demographics and the growth of the gig economy for companies. In May 2018, he was named to Governor Charlie Baker of Massachusetts’ Commission on Digital Innovation and Lifelong Learning.

Joe has spoken at numerous management conferences and has written extensively. His work has appeared in Harvard Business Review, Sloan Management Review, CEO, and The Journal of Applied Corporate Finance magazines, as well as The Wall Street Journal, The Financial Times, The Washington Post, Politico, The Atlantic, The Hill, Axios, The International Herald Tribune, China Daily, India’s Business Standard, and Brazil’s EXAME. He has appeared on CNBC, NPR’s Morning Edition and On Point and NBC’s Nightly News with Lester Holt. His white papers, Just Say No To Wall Street and What’s a Director to Do?, written in collaboration with Professor Michael Jensen are used in the curriculums of dozens of MBA programs worldwide.